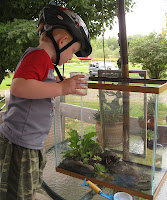 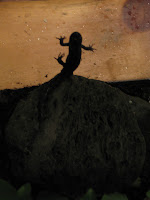 Everything is an ADVENTURE when you're wearing a helmet! 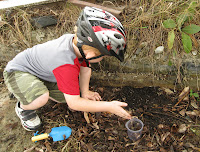 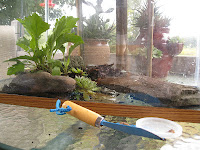 Nocturnal Salamanders that hide really well in the daytime make for fairly boring terrarium watching. At 3:00 a.m. the salamander I found in our wood pile clung to the side of the glass when I let Jax out so I tried taking a picture. Not a great effort but proof it was in there at one time!


You MUST feed your guest pets. Even if you can't see them. And even if it means getting off the bicycle you just learned to ride WITHOUT TRAINING WHEELS this week!
We placed our trust in the internet and found a dozen worms, a few slugs and assorted creepy-crawly things near an old cement foundation. I thought it would be really cool to set up the old fish tank so Ben could see the 6 inch salamander I found the day before. We opened it several times and Aunt Laurie even braved moving rocks around hoping we would catch sight of it. It hid really well! But it was the best fed Salamander in town. Ben dumped the whole jar of bugs in before I had time to suggest perhaps just a few?

"Most people would not consider hanging out under rotting wood feeding on a diet of spiders, centipedes, slugs and earthworms as their ideal lifestyle. The blue-spotted salamander believes it's just grand. This salamander found throughout Michigan is common in moist deciduous hardwood areas and swamp woodlands, preferably with access to vernal ponds. However, they often persist in drier, human disturbed second growth woodlands. Their diet includes insects, spiders, worms, and other small invertebrates.


Their coloration can vary but generally they are black with turquoise or pale blue flecks and spots on the sides, limbs, belly, and tail. The belly may be black or grayish black. Adults average about 3.5 to 5.5 inches (8.9 to 14 cm) long." *They seem to live in Maine, too. 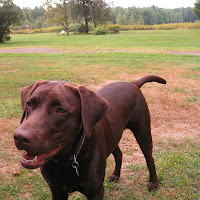 Our guest has been released back into the wild. A little farther away from our wood pile.
He was air-lifted out of the tank by a garden hoe, along with the little island oasis and all the bugs and worms that were left.
For the first time I could actually see his blue spots!

Picture of Jax by 5 year old Ben.
Her eyes may still be a little blood shot from being sprayed by a skunk last week. Tough way to celebrate your first birthday!

My, you lead a varied life!
Think of all the things in which you are becoming 'learned'. :)