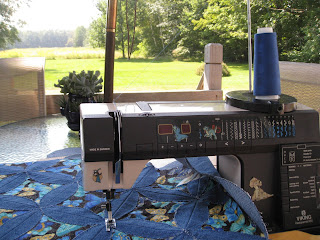 I took my sewing machine out onto the deck. I've found the best room (outside) the house for some sewing - to beat the heat of the tiny room my sewing machine usually shares with the piles of laundry in waiting. Shade from the maple tree plus the umbrella over the table kept me in shade until 2 in the afternoon.

I'm making another Circle Jeans Quilt - started this spring so it's NOT in danger of being labeled UFO. Yet.
I want to make this one big enough to cover our Queen sized bed. Time will tell if it can actually be used for sleeping under, or simply a cover quilt that's "okay if the dog climbs up or husband keeps his shoes on" layer. 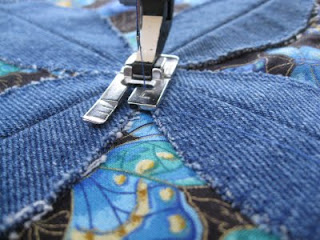 I discovered the perfect sewing machine foot to combat the stretchy bias of denim cut in a circle. I've never actually used this foot and didn't know what it was for until I opened my owners manual. Book says it's a Corded Zipper Foot. (I think...I can't find where I put it. Which means I will tear the house apart trying to find it because I HATE not being able to find something. The mess I will have to put back afterwards is not always pretty.)
BUT ANYWAYS...best foot ever for holding down the bias material while doing the best Blanket Stitch my machine can manage. Once I got used to "where I should be looking" 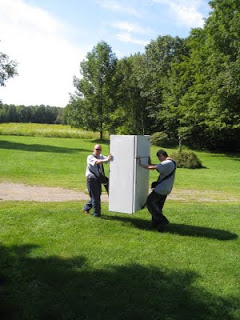 as I sewed along feeding fabric through.

In other news: We got a new refrigerator. My first Brand New one. Ever. Stuff is cold again AGAIN and I guess that's all that can be asked. Except I'm ridiculously pleased with it!

Sears delivery & take away went off without a hitch.

Unlike the purchase of my new stove which I picked up at Home Depot myself and the silly old man tried to load it onto the truck all by himself. At which time I threw myself under a corner of the box about to hit the ground.

Professional. I took a picture of the way they carried the old one out. Told them "I blog" as I snapped the shutter twice. Man walking backwards said "Well, that's a first"!
Posted by Laurie in Maine at 5:30 AM 3 comments:

She walked on water 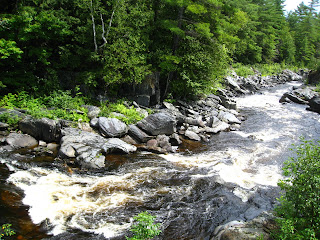 Betrayed by Season (again)
The forecast said 30% chance of afternoon storms on Friday so we headed to the river. We would stop for breakfast along the way. Tom would cast for trout and I would get out into the fresh air, hike along and cast on for a new sock. Knit while waiting.
Snap a few digital pictures and just enjoy the beauty of the day. I haven't ventured very far this season as the weather has just sucked. It was time to get outside.

Arrival at his chosen branch of the river requires stepping into the ICY cold, spring-fed water to cross immediately. (Because the fishing is better on the other side?) Whatever. I had made my peace with getting wet at least up to the knees when I agreed to come along. The water has been too deep for my comfort this year. I usually fish too, but this tropical-rainforest season that has morphed our spring & summer into something so wet and unrecognizable for our part of the country, I refused to pay for a fishing license this year. I checked the State website and a one day permit was half the price of the full season fee. Screw that. I'll just knit, thank you.

3 fish were caught right away. 11 a.m. In the time it took me to knit 6 rows.
And then the sprinkles started. Wind came gusting down into the valley where we took shelter under a thick canopy of trees. And the distant rumbling (he tried to convince me were "just trucks going over the wooden bridge") continued. For half an hour we stood back to back against our pine protectors, even as we debated the dilemma of not standing under a tree in the middle of a forest during thunder. But it seemed distant and sky was lighter over there. Really. The sunshine would return soon. Sure it would.

To get back to the jeep (with a muffler that had suddenly gotten extremely loud 2 minutes before arriving at our destination) there was still a river to cross. Conceding defeat, we decided to make a run for it.

Two steps back into the ICY water and the loudest boom of thunder all day was followed by a river that glowed with lightening in the next instant.
Tom was a step ahead of me, holding my hand.
Reminding "slippery rocks".
"Go slow".

Except suddenly I'm two steps ahead of him, still clutching his hand but confused by why he needs me to help him along. In the instant of panic at finding myself in water while lightening was happening, I'm pretty sure I walked on water at least a couple of steps. I could have gotten the rest of the way to the other side, but for the hand that would not let go.
A deep breath while the panic receded and then we were across. It would be several more minutes before the heart rate would return to normal. Another 15 minutes of walking through the pouring rain.

Just as predicted, the sun was back out by the time we had the jeep halfway down the mountain. Betrayer!
Even the maple trees have started shedding their red fall leaves, as if they give up on this one. Fall is looming with a dread I don't remember ever feeling more. 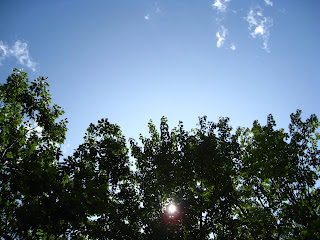 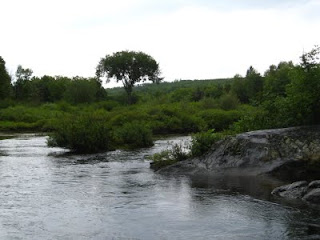