Socks have NO THUMBS! 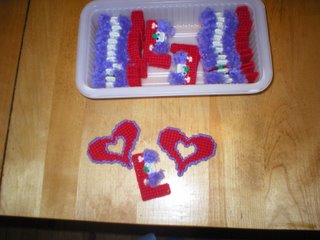 It's been a while since I decided I could do this - not sure if I'll be able to figure out how but here goes!

December 23, 2005 mom had an eye doctor's appointment and that means WAITING. I had forgotten to pack something to do. Usually I bring along my Letter People. Well, I'm not driving 3 miles back to the house so I on impulse decided to take knitting lessons instead. How about socks?

Explaining LETTER PEOPLE:
I make plastic canvas Letter People for the two 14th Street Kindergarten classes in Bangor. Each time the kids get a new "letter person" in class I try to have one of the 2 inch letter shapes for each of them to take home. I started last year thinking it would be a good way to use up left over yarn & canvas from when plastic canvas was the rage. By the 3rd letter I had to buy more. I hadn't done the math for 26 (letters of the Alphabet) times Kids per class (40 total last year/ 30 this year). AxK=1040 FINISHED in 2005. On the bright side for 2006 there are smaller classes...only 780 by June! We are on letter U right now, having completed 11 letters of the alphabet.

(Updated with photo of newest letter L for Valentine's Day - tried to post it with day 2 olympics message. Didn't work!)

BUT I forgot to bring them so what to do? Waiting room magazines suck. Mom has many skeins of yarn and Double Point Needles of multiple sizes in her stash. Decided to try knitting SOCKS. Mom has knit socks forever...my kids call them Grammie Socks. So off we went with a set of size 4 needles and navy blue yarn - too dark for mom to see well enough to count rows since her less than successful eye surgery.

We sat down in the waiting room (15 minutes early for a change) and out came the Grammie Wannabe Socks supplies. I cast on the first 8 stitches, went to cast on the second needle and ...nothing. HOW DO YOU DO THIS? Not off to a great start. Did I mention I haven't knit in about 15 years? And I never was all that good. Mom got me straightened out just before they called her name and left me to it. Those first few rows of knitting in the round were a little shaky and it wasn't looking too good about the 4th row up when I grabbed what I thought was the extra (4th) needle and it was actually from a row: I had just pulled the needle out of an entire row and there staring back at me were 16 stitches off the needle - NOT GOOD! I managed to pick them up, untwist them having gotten them back on the needle backwards and continued on. Finished 20 rows by the time mom came back to the waiting room.

So began my newest obsession. KNITTING? Have to admit I never would have thought it possible. Tried knitting mittens many years ago and ended up with 2 or 3 pair- most of them missing thumbs...I HATED doing thumbs!

Posted by laurie in maine at 8:11 AM No comments: