Something to say. Maybe not.

I stayed too long.

It happens often enough online, not to be all that surprising.
You click a link and it takes you some place unexpected. Bad.
A place you don't want to be.
You can back away without too much fuss. Say nothing.
It'll be gone.

Sometimes you click a link and you're not sure where you are.
You stay too long trying to figure it out.
Their point of view.
The meaning.

I stayed too long.

So I'm not sure why I feel troubled, disillusioned even, because of how I got there. Does the person who took the time to post the link really agree with these people? Maybe I didn't stay long enough to understand where they were coming from. I don't think I'll go back to see.
Not sure why I can't shake off the ugly 24 hours later.

These were the notes I scribbled to paper yesterday, after I had backed away.
In case I felt like seeing it in more permanent font.
After I had showered.

Will America ever find her "center" again? We need leaders truly dedicated to "Uniter, not divider" philosophy of a long ago election lie.
Broken promises. I never believed were more than a campaign slogan.
But hoped it might be true in the end.

Is there hope liberal Conservatives and conservative Liberals will ever realize there is a middle ground for compromise? Somewhere in between, where they're not so different. That the good things they want for themselves and their neighbors are acceptable compromises.

Compromise needs to come from both sides, so that the scales are still balanced.
Not standing in the middle, so much as level. Equal from both sides.

I feel sad to be American. I don't like this feeling.
Perhaps her People will fix things, when Leaders will not.
Someday soon, please.
Posted by laurie in maine at 5:22 AM 1 comment: 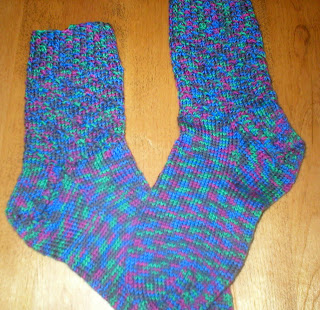 In the space of 27 hours I've finished my Mad-tinis.

Sock pattern arrived in my mailbox Thursday around 5 pm. Right in the middle of cooking supper so it was closer to 6 before I actually cast on. I knit until 10 pm but I'm a morning person and couldn't see what I was doing through all the yawning tears, so went to bed.

Rib was different! It reminded me of linen stitch a little. But more like a crochet afghan stitch I learned as a teenager. Couldn't remember what it's called so googled "crochet long hook" and came up with TUNISIAN crochet. I don't remember how to do it but I still have the hook.

Socks feel stiff; pattern called for sport weight and size 2 needles. Would have been way too big up a needle size, so maybe a thinner yarn next time. I may try the pattern again in solid or flecked colors so all those PSSO's swirling around in the really cool spiraling design show up better. My two-fisted method for passing a stitch over 2 others is slow at best. And soon discovered picking up lost stitches in this pattern would be a bitch, so went even more slowly.

It looks like at least 8 people finished ahead of me - a couple WAY ahead! Not sure what the next round will bring but once again I had to go to town for 3 hours of errands. PTQG newsletter absolutely needed to be at post office so it could get to the Printers and there was no food in the house since I didn't get groceries last week during the ice storm. Cutting into some serious morning knitting time. Next pattern will probably need my undivided attention if I'm to survive.
Posted by laurie in maine at 4:19 AM 3 comments: 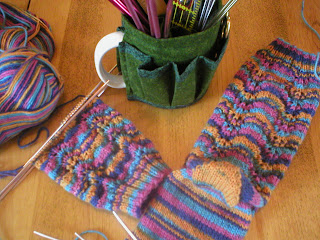 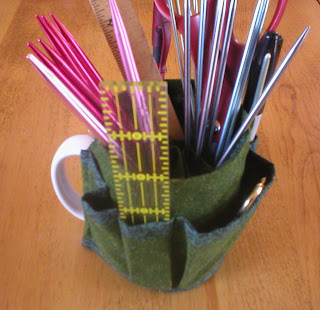 Next round of Sock Madness begins March 22nd

The 2nd pattern for Sock Madness is due to arrive in mailboxes Thursday afternoon.

To keep my fingers nimble before another all out KNIT LIKE A MAD WOMAN weekend, I started a pair of lace socks using a striping/variegated yarn - yarn I detested before finding this pattern. Amazing what the curving lines of a simple lace pattern can do for these colors.

The bottom of the heel shows the sock, if knit in a basic stitch, would very much look like the Madcow pattern we just did. Without needing 2 strands. Not being a fan of stripes, I've started and ripped several patterns trying out this yarn. I think this one will work.

I didn't give this pattern a second look until I saw completed pair done by Stitches of Violet. Their picture is useless if you don't click the link behind.

I started off slipping stitches Purlwise and felt there was something funky happening to the left side of the lace pattern. A quick email to ask Marguerite which way to go and I should have been slipping Knitwise. She didn't think it should be making a difference.
So any funky stitches might just be me?

I listened to a couple of knitting podcasts this morning. I've only just figured out what to download in order to listen to them without MP3 or ipod, so podcasts are still a novelty.
I listened to It's a Purl, Man for the first time with Subway Knitter as his guest a week or two ago. Enjoy his style muchly. While searching about for new podcasts this morning I came across this MUG BOSS. A coffee cup tool bag. I bought a full size one for actual tools that fits over a 5 gallon bucket.

I whipped one up for my coffee cup this morning.
A quick, enjoyable morning of sewing... for a change.
Posted by laurie in maine at 2:35 PM 2 comments: 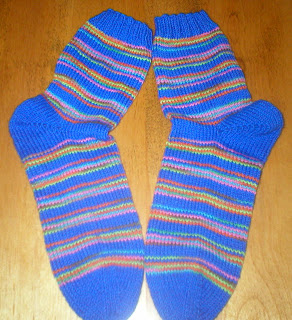 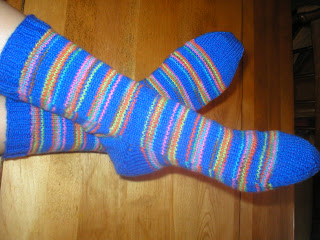 I think I finished in the top 12.
Finished photos were to be posted on Flickr and I think about 11 pair were posted ahead of me.

Sock Madness patterns arrived in mailboxes around 8:00 Saturday morning. Had mine printed out and cast on by 8:15. Only did about 6 rows of the cuff before heading off to town for 3 hours to take mom to get groceries. Next week is sister-in-law's baby shower and mom declared we must get gifts...no time next week.

While my Sock Mad mind screamed NO! I have no time today! the reasonable functioning portion of my brain agreed she was right and we needed to get it done. Do you know how many red lights you are likely to sit through when you're in a hurry?

ALL OF THEM. And you will just miss most of them at the yellow and sit for the complete sequence of yellow, red, left arrow, straight...okay you may go green.

I was back home by noon and thanks to Internet connection standing by, went to site to see if "Repeat Pattern 4 Times" was a booby trap. 4 times or 5? Questions were raging in the comments section but moderator declared she read it as 5.

So 5 it was, although I think it would have said 4 more times? Not a problem so long as I didn't get myself disqualified doing too few. I am very determined not to be a whiner after the KNIT OFF tragic scarf episode. NO COMPLAINING ABOUT A SOCK PATTERN FROM ME!!

Turns out designer meant 4 and they promise to check future patterns to avoid confusion. I like patterns with lots of little "sonar checks". Notes written into the pattern along the way telling us number of rows now complete or number of stitches left on needle. You know. Patterns written like they think they might be speaking to an idiot. I'm good with that.

Of course a blinding, almost consuming panic began about 2 in the afternoon when on the third attempt at doing the SHORT ROW HEEL as written I concluded I didn't know what the hell I was doing. I've never done a short row heel. I've barely heard of them!

Came back to the Internet and YES we must do heel as written.

A blinding, almost consuming panic may not be the best state of mind to learn a new technique! My first short row heels are not perfect by any means. If Amazing Lace had me fascinated by "Holes on Purpose" you can imagine how frustrating "Holes by Accident" are.

I have not been won over by short row heels method. Yet. I may only ever attempt them again free will if a future Sock Madness pattern demands it of me. Because. No whining.

Had first sock down beyond the middle of the foot by 9 p.m. Took a nap until after midnight and then finished sock 1. Cast second sock on with my first cup of coffee Sunday. We lost an hour just as I was finishing the first toe.

Technically, it may have taken me and hour to knit the last 16 stitches!
Posted by laurie in maine at 3:31 AM 4 comments:

Throwing in the scarf! 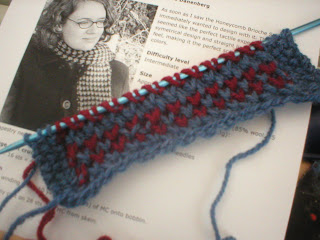 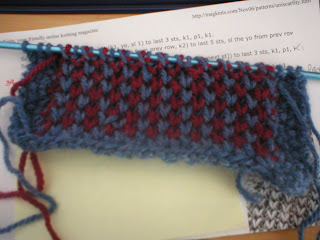 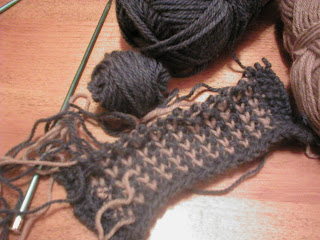 It's March 4th and I quit.
Sadly I must admit: I am NOT an International Knitter.

The 1st assignment is the MagKnits scarf found here. Shown are 3 attempts. It was ripped back at least 5 or 6 times.

I detest this scarf!

I'm not a scarf person, although I have requested the book that promises to give me insight on how to make this.

With many more Letter People to make for 2 Kindergarten classes and a 20 page newsletter deadline fast approaching it's time to face the facts. There are not enough hours in the day to be knitting something I hate.

I just did my dishes rather than knit an icky scarf.
I thought I hated doing dishes more than anything! Good luck group O.
Posted by laurie in maine at 6:31 AM 3 comments:

Onward even in denial of the obvious 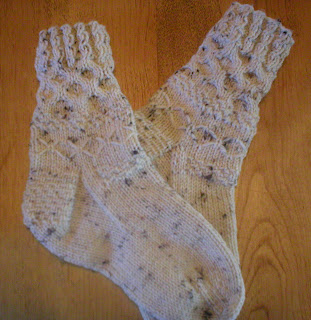 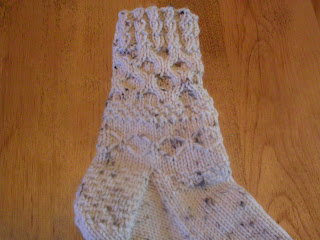 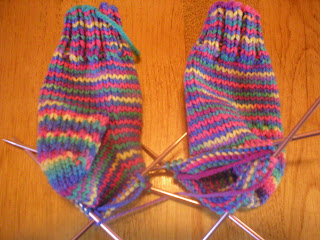 Choked by your socks lately?

With knit stitch dictionary open, I began knitting each section of these socks in a different pattern. Inspired by this pair and lusting after them greatly, I thought I could do it.
Make Fisherman's sweater socks.

Clearly I was wrong and it's back to the drawing board, as they say.

(I wonder if anyone has ever steeked cuffs of socks and inserted a gusset/flap/button closure? Thing. I'm thinking about it. It's cheap yarn I bought a year ago when I first took up knitting again. Experimenting is how you learn, right?)

Attempting new stitches and discovering "I can do this" was satisfying. So onward I knit.
Even after doing the ankle in a Honeycomb cable and finding it might be a little snug, since even my hand had a hard time trying it on.

Did I reverse course?
No. Denial. Ignore it and keep knitting. Try another stitch.
Quilted Lattice!! How amazing is it to scoop up a long strand of yarn and lock it into the rows above. So cool. Keep knitting.

Much like these little socks I started on Sunday at Mom's.
Needing something to do with my hands, I snagged a part of a skein of variegated yarn from her stash and started knitting. Like I knew what I was doing.

Like there would be plenty of yarn for whatever size appeared.
Or I would pick up another skein. Of course no one has this color anymore.
Posted by laurie in maine at 5:16 PM 2 comments: