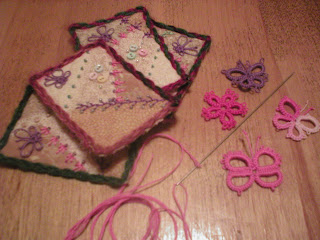 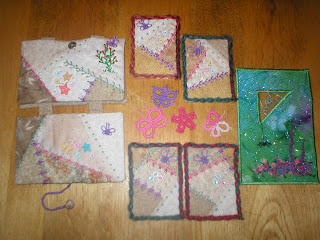 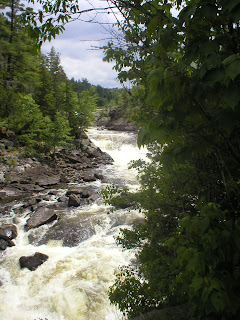 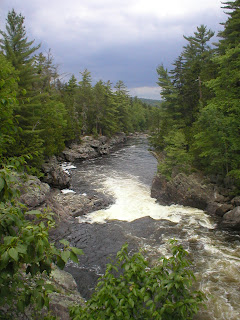 Sure. Other people already know about Needle Tatting, just as America already had a fair number of residents who should have perhaps slapped Chris upside the head and pointed out the fact that they were here first.

But a discovery is what we make of it.
There's a good chance I'm going to be away from my knitting needles a bit longer.

A week ago today I was searching through some old patterns I had printed off from the net.
For someday. For "when I get around to it."
I was looking for basket postcard ideas and although I never found the one I was thinking of, I came across this one. Printed out in July 2001.

This basket has waited very patiently for me to "get around to it"!

(Although it turns out only the flowers are tatted. Basket is actually drawn onto a note card, so I've free handed a sketch of a larger version to appliqué onto fabric.)

I went out and bought a tatting needle that very morning and have doodled a bit waiting for some how-to books to arrive from the library. There are a host of online instructions & support groups. I've joined one specific to needle tatting and expressed my joy at discovering their secret. Needle tatted motifs may find their way onto a few more fabric postcards & ATC's.

It's vacation week so another "discovery" was made due the fact that we were lost. Tom was driving so we'll call it exploring! We found the Dead River above Long Falls Dam.

Map reading directions: Go to Bingham, Maine; cross the river and turn right. Then just drive.
(Check to be sure the gas tank is full before encouraging the fool to do this!)
Posted by laurie in maine at 6:06 AM 3 comments:

There. And back again. 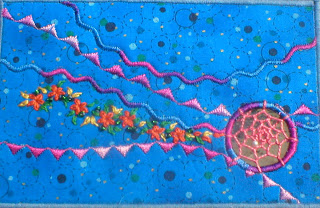 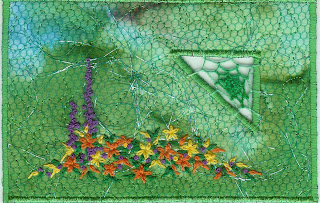 A state of flux?

Noun 1. State of flux - a state of uncertainty about what should be done (usually following some important event) preceding the establishment of a new direction of action.

Yes. I think that about says it.

I've taken a break from knitting and apparently blogging as well. My lord! According to the birthday cake we ate in May, I've aged a year in the time that I've been absent.

There were Letter People to finish before the school year ended and I'm happy to say: they are done. Word has it only 21 kids have signed up for kindergarten next year, as of now. 42 like this year and NO WAY will I be touching another piece of plastic canvas again. Ever.

And some who are just polite.

She's back working at Scholastic Books in New York - just in time for the Harry Potter book 7 party Scholastic will be throwing. So this is officially a mom blog again and I must write embarrassing childhood stories in order to fulfill all mom blog requirements.

Mom & chocolate lab are now both resting our chins on the windowsill and looking for the missing kid. Southeastward. Like if we just look long & hard enough she'll come into clearer view.

(They don't know about our other driveway ;-)

Yes. I needed a break from the letter people.
And knitting.

Perhaps some good advice to myself would be to stay away from competitive sock knitting. Nothing like beating up a perfectly fine desire to knit socks with some competitive non stop knitting madness. I don't yet have the urge to pick up knitting needles again.

Except. I did buy 3 skeins from the clearance shelf yesterday at City Side Yarn. 40% off was what got me into trouble last year about this time if I remember? This is prettier.
And NOT variegated OR striped.

Instead I've been making fabric postcards and participating once again with online postcard groups. I forgot how much I enjoy making them and have been sewing them while the mood strikes. Because it would seem I'm a One obsession at a time crafter. Wonder what's next?

Knitting most likely. I bought yarn!
Posted by laurie in maine at 5:31 PM 3 comments: