Time to buy a lottery ticket! 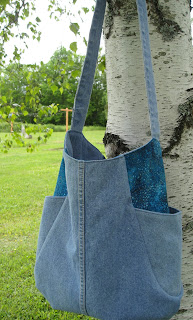 June has been a very lucky month for visiting Blogs.  I enjoy a chance to win something by simply leaving a friendly comment.  I don't generally jump through hoops for multiple chances if you Blog, Like, Follow, Tweet or Stand on your head.  One chance is enough!

I've been following Purse Palooza 2012 and won the collection of Noodlehead bags I mentioned in my last post.  I made another 241 Tote Bag, this time using an old denim wrap-around skirt.

Following a Purse Palooza review of the Vera Bag by Swim, Bike, Quilt!  I won one of the three patterns she offered on her blog. :)

I also won the quilt book Scrap-Appliqué Playground by Kim Jamieson-Hirst of Chatterbox Quilts. We were in the middle of building my new clothesline and Jax was being a pain-in-the-butt so I her took her inside. Out from under foot while Tom finished something without us. I got online for a few mintures and did a random search for quilt blog hops and came across the Book-A-Round blog tour.

What a happy surprise to open an email that says you win!  I offered members of the Letterboxing group on Ravelry a chance to win my handmade log books in March & May. I was using a bit of bribery to liven up a group that had been silent for a year.  I gave 2 books each to 2 winners.

So what goes around comes around . . . And you can't win if you don't try so GO FOR IT the next time you come across the opportunity. Friendly comments take so little time.
Even without a chance of a prize they're most welcome. Priceless! 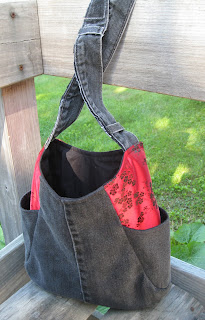 Don't know why I have to work so hard to find energy to blog.
Where to begin?

I happened across Purse Palooza 2012 just as it was set to get underway for the month of June. Celebrating bag making of all kinds! Invited bloggers review 2 purse or tote bag patterns each weekday.  Some of the patterns are free, but most are for sale.
With lots of chances for prizes!

AND I won already!! 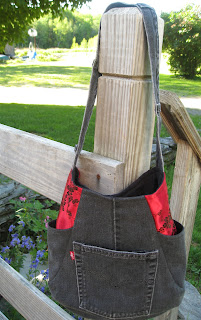 I received all of Noodlehead's bag patterns :)

I made the 241 Tote Bag!
I recycled an old pair of black denim jeans, including the pockets (1 inside) and part of the waistband for the strap. The pattern consists of just 3 pieces grouped at the end of the pdf. Pattern pieces are PRINTER/INK FRIENDLY if you decide to only print those. There are very detailed directions that can be followed from laptop.
The pattern also called for an outer zipped pocket that I fully intended to reuse from the jeans, but in the end I left it off this version. The pretty oriental accent fabric was some Sara gave to me as a Christmas gift a couple of years ago.

I love everything about this bag! It's a perfect size - not really as big as I was afraid it was going to be.
The curved inset with side pockets were a little tricky to sew without puckering. I was determined!
The lining has a few gathers, but I let it go! I didn't top stitch the side pockets - mostly because of the bulk - because if it didn't go well it would ruin the entire thing.
It was such a pleasure to actually follow a pattern, rather than my usual Just Wing It method. 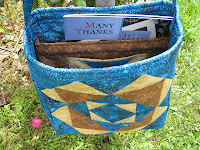 Which is what I did making this bag. I used a pair of UFO quilt blocks that were part of a Block of the Month series I abandoned long ago. Easily diverted as usual! I had been reading about Snap Bags - using metal carpenters measuring tapes for snap shut closures. I wanted to make one. But of course I wasn't content to make my first Snap Bag a simple envelope style sack as most of the tutorials I found described. NO. I wanted to quilt-as-you-go using Sharon Pederson's method for reversible quilts.  And it should have sides, rather than be a flat pocket.

The tape measure is on the inside pocket... but I cut a slit to remove it and then put it back in afterwards.
Technically this bag is actually reversible, using sashing - sewn by hand - to hide every seam.  YES. Make it harder than it needs to be. As usual.

In between these bags I also sewed the Naughty Secretary Bag ... Lindsay Tote on the Pellon site.

I may have jinxed my sewing machine by deciding after all this sewing it needed to be cleaned. Took it apart, cleaned the dust bunnies and had it all back together the easiest I ever remember. Usually the back panels take forever to line up so the screws can go back in.

This week in CRAZY.
So, Jax was running around the yard crazy-pleased with herself for finding a long strip of fabric. Hanging a foot from either side of her mouth, it streamed out like a banner while she trotted around with her find - just far enough out of reach for me to possibly take it away from her. Fine. KEEP IT!
She had dragged one of the girls poor baby dolls from down over the bank where they used to play house. I assumed she had found a piece of clothing or an old blanket they left behind (20+ years ago!). Chewed to bits all over the front yard with just the doll head left.

Later, while I'm sitting in the recliner knitting my latest project, she decides I should have her banner. Shoves it into my lap. Perhaps I would like to play tug of war? WITH A SNAKE SKIN! Shed recently, no doubt, from the big-ass snake tormenting me everywhere I go lately. At least 3 times I've run screaming for my damn life after nearly stepping on it. I don't care if it's harmless. Make it be GONE with whatever means you like, honey!

Meanwhile. Just before daylight one morning last week Jax let out a low growling warning while looking out the bedroom window. I bent down to look in the direction of her concern just in time to see a basketball on legs walk across the front lawn. Went to the door and turned on the light just as a small porcupine waddled up onto the deck. It then marched up and put it's paws up on the door like it was asking to come in. NO.

No wonder I never blog. Where has the time gone? Time to get moving!!
Posted by Laurie in Maine at 10:43 AM 1 comment: