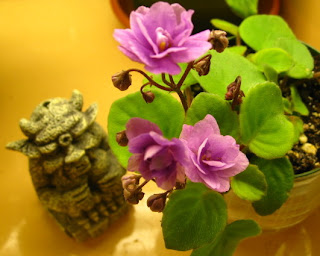 Starting Over Began With Forgiveness

My Mom has always grown African Violets. She grows them on her windowsills and there’s nearly always something in bloom. No names in “heavy” potting soil; in plant pots twice the “proper” size. So far as I know she’s never bought fertilizer in her life. None of this matters to the plants on her sills. They bloom.
When I moved away from home she happily supplied me with a plant or two in full bloom. I would enjoy them a few months. And then they would be dead. (A little water wouldn’t have hurt!) My sorrowful confession would result in blooming replacements. We would repeat this love-kill relationship several years before it occurred to me these plants weren’t meant to be disposable and surely I could do better. I went to the internet and was amazed by what I found. They had names! With blooms in colors I had never imagined; variegated & girl leaves were a delightful surprise and so of course: I had to have some!
For three years I became a fairly successful African Violet grower.

"Laurie was a newbie, enthusiastic and wildly modern in her approach and expectations of her violets." To quote a friend in Montana!

The miracle of babies-by-leaf was perfected and beautiful plants bloomed on my new lighted shelves. Purchases from well know vendors were made, private collectors traded extras for postage and BINGO was won. Twice! Before I knew it more than 100 names came. And went.
Problems began. Gnats were everywhere. Powdery mildew appeared. Plant centers began to look funny. Information overload probably made things worse with every counter measure I tried. I started throwing plants away by the tray full and before I knew what had happened, I was back to three plants on a windowsill. 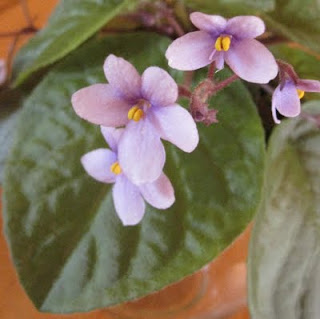 Over the next two years they would barely survive. They stubbornly hung on even as their labels fell away and watering went back to the desert-flood method. (Ignore until desert dry and then water the crap out of them like that will make up for it.) Shame on me! I knew better. I had made internet friends with wonderful people like Mrs. John of Violet Voice, Fred Hill, Nancy Robitaille and Rich Follet - I won Sweet Violet’s 1st Bingo! My youngest went away to college, as I think back now. Empty Nest tears & fears may have played a role in my disheartened lack of energy. They felt like too much work.
In December 2008 I decided I missed the blooms; I missed standing in front of the lights each morning with my 2nd cup of coffee, lifting pots; testing for “heaviness” to see if they needed watering or grooming. I missed my internet friends but I didn’t feel worthy of joining the forums again until I could prove my new found enthusiasm was more than a whim. I would allow myself a lighted shelf for the winter months and IF my three survivors made a healthy recovery I would feel like I belonged once more. On Valentine’s Day a local nursery newsletter announced it had AV’s “Just in – to fight the winter blues!” My 4 foot shelf had plenty of room so 3 no-names were chosen. Their soggy peat was replaced with my mix, suc 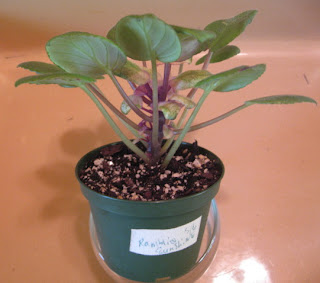 kers were repotted and leaves were set to practice propagation. It was all coming back to me and it was fun again.
Three lighted shelves have been turned on now and 1st blooms have rewarded my renewed efforts. My original three are in bloom as well; enough so I can tell who they are once more. They’ll always need an “*” if I bother to mark the pot with a name, but Woodland Sprite, Rob’s Toorooka and Rob’s Zoot Suit have earned their spot back on the shelf. My named collection now number about 30. Keeping that number at a manageable level takes a constant reminder of the need for self-control. Too many may take the fun out this just like before. But once I forgave myself, it felt okay to begin again.
Ramblin' Sunshine was among the first plants in an order I placed in May 2009 - after I had proven worthy of buying more. It was actually a "gift" from the seller. (shhhh....*gawd awful ugly little plant is hurtful and we were in denial ;)
She has come a long way under my rehabilitated houseplant care! 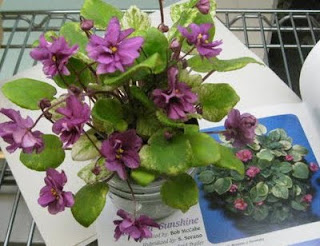 P.S. !!
Violet Voice is about to host a game of HOLIDAY BINGO! I'm donating socks & wrist warmers - and a journal. NEW MEMBERS are welcome to play.
Posted by Laurie in Maine at 4:03 AM 2 comments: