Happy 1st Blogiversary to me! 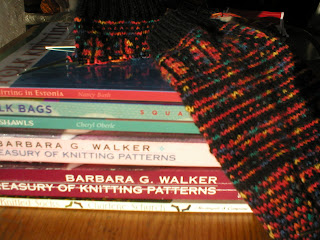 A year of knitting (mostly) socks & blogging about it

A year ago today I started this blog. For the most part it was intended as a Mom Blog. A way to keep in touch with my youngest daughter while she was away in New York. It was her 2nd semester as an Exchange Student at Hunter College and I wasn't taking my half-empty nest quite as bravely as I thought I would.
There was sobbing.

I wasn't taking these politically trying times very well, either.
There was screaming and swearing.

Actually, it feels like I've been angry for a very long time. Since the Supreme Court decided America did not need to recount votes and picked a president. Because it would take too long if they counted EVERY vote over again? Seriously? Before that I would have called myself a moderate. I've even voted for republicans! Mostly because they were women. That's NOT happening again. Ever. And this country's voting system is a joke. The real crime is it's still not fixed and papertrail/recountable ballots are not the law of the land in all 50 states. WTF?

Knitting as therapy has improved my sense of well-being. Really! ;)

Okay fine: I've been caught daydreaming recently. It involves a presidential bicycle built for two, onto which we talk dick & george into starting their next listening tour. From the top of Mt. Washington. Or some other place really twisty and steep. Slippery works, too. If secret service could just give them a little shove over the side to get them started?

Shut up. It's my daydream. Perhaps I need to knit faster?

It also happened that I was in the process of knitting my first pairs of socks one year ago. Six socks were in different stages of doneness as I learned each new segment of Mom's Basic Sock recipe. My first sock lesson was December 23 if this blog post is to be believed. Knitting had not yet taken over most all spare time. The name I came up with for this blog might have been a clue of things to come, had I given it a moments thought!

The year has seen my knitting skills stretch a little and improve. More difficult stitches have been attempted. Yarn Overs to make holes on purpose and now cables! I must try more cables.

My death grip on needles has eased up a bit. DPN's actually fall to the floor from time to time. Early on I teased mom as she made a grab to save one of my needles, the only it would ever fall was if she kept pulling on it.

My knitting library has grown to 6 books. I've only put 3 of them to use so far so my goal for the new year is to try something from each of the others. Before buying anything new.
I'll be knitting from my stash in 2007 x 2. (Personalized rules includes yarn & books.)
But sock yarn doesn't count? Cool!

What good is a compass? 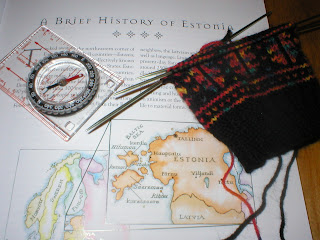 Yes. Once again I have become Stranded.
But I found my compass!
(For all the good that will do?)

More importantly, my map to Estonia arrived in the mail last week. (Folk Knitting in Estonia by Nancy Bush) I love this book! I borrowed it from the library through the Interloan program but they wouldn't renew, even once.
Decided owning this one would be worth it.

I've been trying the different cast-on methods and the braids demonstrated in the book are tempting. I may even try mittens with actual complete thumbs in the very near future. I'm squeezing in a little reward Stranded knitting for each batch of Letter People I work on.
To confess I would rather be knitting might be an understatement. But there will be no disappointing the Kindergartner's of 14th Street School, trying to convince them there are only 10 letters of the alphabet. I may have started looking forward to the end way too soon - not even half way through yet? Yikes!

I've also finished a second pair of the Fetching fingerless mitts. This pair have no picots at the knuckles; I did two rows of linen stitch and then a Kitchener rib bind-off. Sara now owns them, although Stephani may do a secret-sister switch when nobody is looking.

Both girls like the second pair better, without the curling picot edge.
Someone is suffering from 1st pair grab-itis? 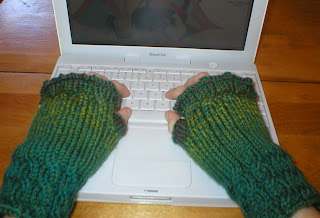 I cut my thumb a week and a half ago, cutting potatoes. With a really dull knife that I should have known better than to be using; slicing into my thumb with as much force as I had planned for the spud. Bad enough that knitting hurt like hell.

Working plastic canvas Letter People hurt just as much, but their class lessons have gotten ahead of me so I forced myself to stick to the Kindergarten project and try to catch up.

I'm still a bit behind, but I rewarded myself with some therapy knitting yesterday, now that the throbbing has eased.

With Letter S finished finally (and in less than 24 hours!) I've finished a pair of Knitty's Fetching Fingerless Mitts. I don't have size 6 needles as called for so I went with 5. A size smaller still might work just as well, especially with yarn any thinner that the Caron Simply Soft - Dark Moss - Shadows that I used.

Stephani has already claimed them as her own and is off today to the University of Maine to show them off to a friend who will "be so jealous!" I've teased her into practicing the right tone she should use, should anyone comment on knitted socks, felted bag, woven scarf and now mitts: "My mom made them!" with just the right amount of daughterly pride expected of one hoping to be gifted with more of the same. ;)

This was my first project knitting cables, using a cable needle. Perhaps a good thing each mitt only had 4 rows of actual manipulating of the stitches with that fidgety little crooked needle or it might have been discouraging. My technique needs some work! As it is I feel quite pleased with my first efforts and plan more of these fingerless gloves.

This pattern had several firsts for me as I also did my first waste yarn knitting for the thumbs and the Picot Bind Off, as well as the cables. I may skip the Picots on mine as they curl quite a bit. It may be that I just didn't do it right!

It occurred to me the same cable cuff pattern of the mitts might look cool on socks as well.
At least those would not have thumbs. Not even these half thumbs have changed my dislike of knitting thumbs quite yet.
Posted by laurie in maine at 12:10 PM 1 comment: