Graffiti in the Wild. And other things...
We were driving to one of our favorite trout fishing get-away spots and I caught a glimpse of this bunny at the side of the road.

The pictures don't do justice to it's Bigness! 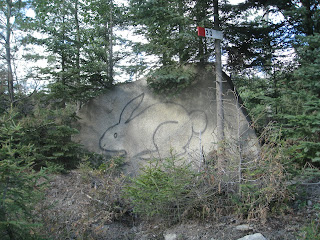 The rock is huge. We went by at quite a clip so I tried to remember enough landmarks nearby so we could stop on the way back. Turns out the mile marker is right next to it.

I've crocheted several tote bags and another doll. Ran out of yarn for one of the bags I've been working on, but found a lady on Ravelry with a half skein for $2. Waiting for it's arrival so I can finish. 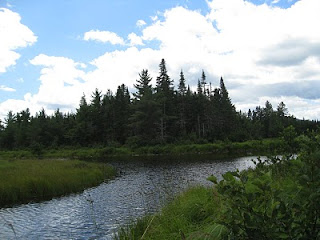 I was intrigued by knit-like cables and bobbles done in crochet. The first time I tried to follow the pattern I gave up in frustration. A couple of weeks later I gave it another try. Unfortunately by then I had used some of the yarn from one skein for a doll sweater, making the bag come out half a strap short. 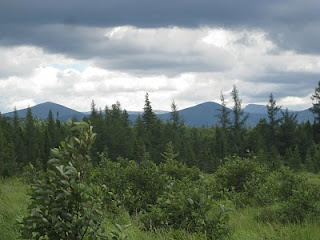 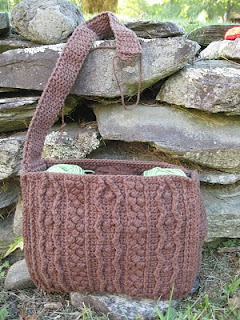 I followed just the front panel of the pattern (mostly) and then made up the rest myself. Searched for stitch patterns with texture and chose Seed Stitch for the back & sides. With the extra yarn I'll be able to do a flap as well, although I don't want anything as big as the free original pattern showed.

We've gone fishing nearly every weekend. The weather has been wonderful this year! Even our garden is doing well. Extra zucchini, cucumbers and summer squash WILL be pushed onto anyone stopping by. I put some out by the side of the road with a FREE sign and it was gone by afternoon. 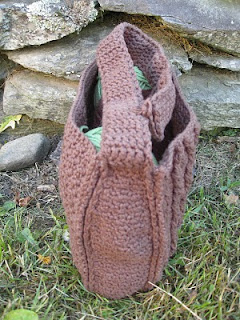 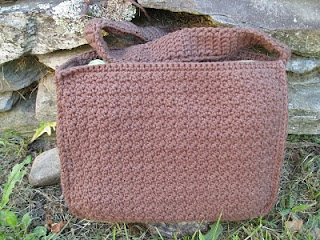 2 weeks ago we put the canoe on top of the Jeep and headed to Sunk Haze Stream for a repeat of a past paddling experience, only to be honked at by a woman in a truck screaming, "YOU CAN'T GO THERE!" Apparently the property owner across the road wanted Friends of Sunk Haze Stream to buy the right of way, but they refused and took down the big welcome sign. Noticed the sign that said where to park was gone but no closed sign was put up. A cable was across the dirt road that went down in towards the stream, but we thought it was just to keep cars from parking down there. I didn't think they could deny access to a stream below a bridge on the main highway. If the drop away below the bridge hadn't been such a cliff-like climb we might have pushed the point. 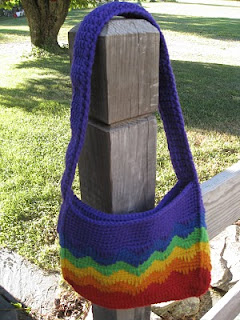 Unfortunately we had the canoe all off the jeep before Screaming Woman objected. We loaded it back on, tied it down and drove to The Hirundo entrance of Pushaw Stream instead.
Please excuse the curse I placed on the property owner and it's close proximity to Penobscot River.

Something about Spring floods rising to his attic.

Perhaps I should be careful what I wish on them, given my brother's slightly less close proximity to the same river.
Posted by Laurie in Maine at 6:31 AM 4 comments: 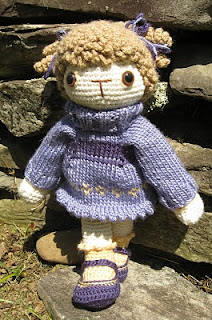 Sara bought a new Mac iBook and took them up on their offer of a "free" iPod & iPrinter.

As the only family member without one of these precious musical iDevices, she decided to give me her old one! She promises all country music has been satisfactorily deleted. I blame her fondness of music with twang on being left with my mom a few too many times. It's now Pearl Jam packed with my love of Eddie Vedder (teehee!) 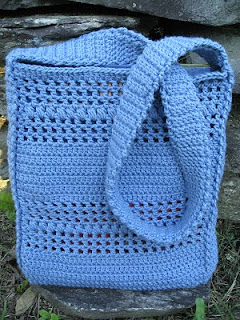 BUT shipment from Minnesota will be based on the update-iness of a certain mom blog meant to keep her in the loop. Further more, mom packed-lovingly care packages shall improve in both frequency and quality. I have accepted the challenge (and critical observance) that the most recent envelope stuffed with "junk mail" failed to deliver the degree of satisfaction she might have hoped a letter addressed from home should have. Let the updating trend begin! 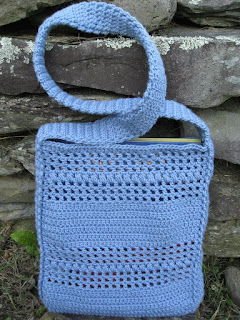 Crocheting bunnies, babies and bags has continued at something of an amazing pace. Amazing that I have not gotten sick of them and moved on to explore yet another obsession. Switching to some past, present or yet unexplored craft of the moment is almost certainly a given. Sooner or later. I proudly present my 1st crocheted bag! My skill at following a pattern correctly proved fatal when at about Row 22 my stitch count had decreased from 96 to 88. Making the bag take on a bit of a pyramid shape.

Upon overnight reflection my state of denial was self-accepted and nearly the entire thing was ripped out and done over. Ripped out all the way back to Row 6. A certain offspring's voice echoing memory of "you are such a perfectionist" in scathing tone like an epitah. I told the voice to be quiet!
Try. Try Again.
Doing something better (when 1st attempt goes terribly awry) continues to be a motto that takes me to my happier place. It only hurts for a moment. The unraveling is done quickly. Like yanking off a band-aid all at once. A certain Treasure Trove of quilting UFO's were unearthed yesterday. Briefly. I stroked the Circle Jeans quilt on top. It's in a stage of almost done-ness that really deserves a place back in the line-up to be finished.
Or else! My sewing machine might seize up from lack of use?
Posted by Laurie in Maine at 5:13 AM 3 comments: