A finished quilt and other things

A quilt top that I made too big. 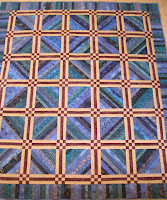 Ridiculous big!  I think it would have dragged on all 4 sides of the floor on our queen sized bed.  I sat with a seam ripper on an Aunt Laurie and Ben Day and took off one row. More needs to go to make it a manageable size. I didn't have the will to quilt this one yet.

NO. I would rather poke my eyes out. I'll be using the blocks for an Evelyn Sloppy pattern instead.

I adapted instructions to fit the 8.5" squares - 30 used right away. The extra string blocks were whacked into 5" strips - across the middle for straight edge "piano key" outer border.  I was completely out of most of the colors, but by salvaging the extras, most of the colors are in the border. 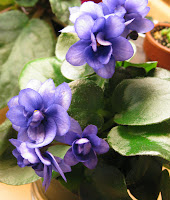 I put it onto the sewing machine - turned around so the cutting table would hold the extra as it fed through the machine. Took one inch of machine stitching. Decided I hated it BOTH the look of the stitches and shoving it through the tiny little space of the sewing machine. Ripped it out. (Cleaned my sewing room back up!) And hand quilted it.

Quilting began March 10th. Final stitch of the binding made 8 pm March 31st! All stash fabrics used for this one except the backing.   A finished quilt in just under 4 months! 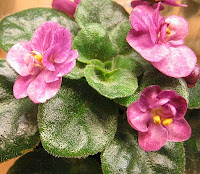 Sock Madness round 2 socks were completed. Knit March 21-25.  Round 3 should start any day now.
We'll need a cable needle.


On April 1st we got 15 inches of snow. It's snowed a couple of times since, without adding much more. It then rained for days and days, melting most of it away.

I am so ready for some outside gardening.

For now I have a shelf of African violets in various stages of bloom!
Posted by Laurie in Maine at 5:46 AM 4 comments: