We drove to the EDGE of America! 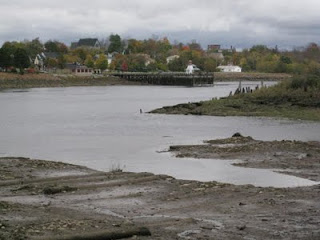 On Saturday we set sail in our Jeep Wrangler to explore America.
Route 9 to Calais, Maine for some Leaf Peeking.

Weather forecast promised a mostly sunny afternoon. So we drove to where it remained mostly cloudy, with rain.
A pattern for 2009 it seems. 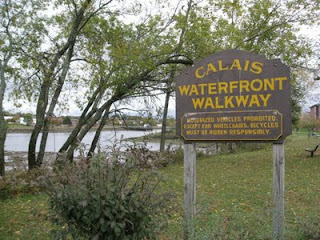 Since neither of us have a Passport it has just hit me: we are prisoners of security.
No spontanous visits to Great Grandparents graveside in Canada, even if we wanted to.

Land of the Free, Home of the Brave motto needs to be adjusted to the reality of today. We are locked in 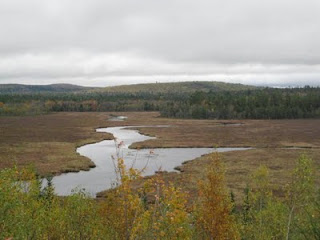 until we pay up for new ID.

Over reaction from 911?
Common sense was the first to go.

Although, judging by the line of cars and the random concert of honking horns, coming back to America is more tedious.

As if an unseen maestro was directing a parade of standstill cars, non-angry honking horns sounded off in a harmony 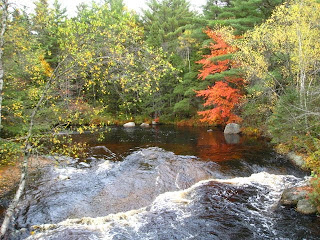 of musical notes floating across the St. John.

For as long as it seemed to be taking, it's a wonder the honking was not the angry kind.

Then again my sense of Homeland Security may be temporarily skewed by the number of times last week I listened to airport terminal messages explain 311 for carry on liquids in luggage, reminders not to take things from strangers and the st 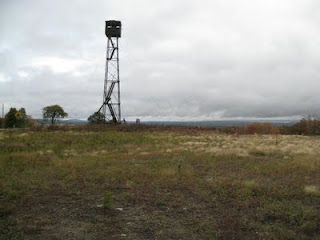 rolling TSA agents with seemingly nothing better to do than to step outside for a smoke.
Take off your shoes and get in line.

Bright side: for 3 hours I was able to make progress knitting my socks-while-waiting as Sara's plane from Finland was still on the ground in Newark, NJ when it should have been just arriving in Portland, ME. 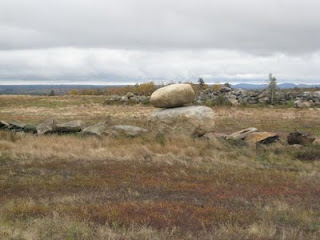 She pointed out that if I had a cell
phone I wouldn't have missed the call 10 minutes into my road trip warning of her absence.
2 hours 32 minutes; 142.86 miles according to MapQuest.
Each way.
But I digress. 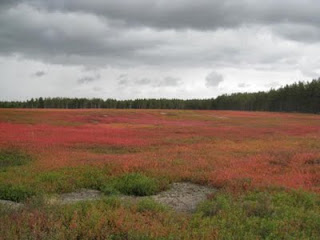 We were leaf peeking explorers.

Did not know blueberry fields put on such colorful fall display.