Sock Madness - out on Round 4 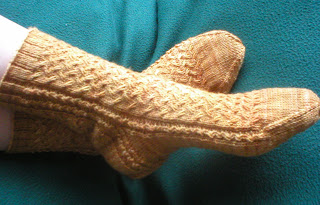 Looks like Sweet Sixteen is as far as I go.
Round 4 of Sock Madness patterns arrived in our mailbox a little after 10:30 am on Saturday. Things were off to a shaky start, with a little confusion for several of us. "Wrapping needle twice" was not intended to increase the number of stitches and for those of us trying to do just that, nothing that followed made much sense.
Luckily the designer hung out with us on the Flickr Discussion board and got us straightened out pretty quickly!

I finished these socks in just under 48 hours, but not fast enough to move on to the next round.
I'm out, darn it!

This pattern had long looped stitches that got dropped and left hanging in mid-air 3 rows down, while you swapped stitches around or knit the 2 next to it and then came back for them. Now they would slant. First one way, then the other.

What actually got the better of me though was the long rows of Right & Left Twists.
My Left Twist technique went very badly! Everything came to screeching halt every time I came to a Left Twist - and there were a lot of them! It would take a minimum of 4 or 5 attempts to get this stitch to cooperate, without popping off the needle unworked. Leaving me right back where I started from. Didn't help much that the more I dreaded each one as I approached it, the tighter I knit; the tighter I held onto the needles, the worse it went. I added a few choice curse words to my technique as each one went by. For good measure. Didn't help.

Original 128+ Sock Madness knitters will be down to the Final 8 and I'm not one of them.
I have Sock Madness Sadness! At least I get the next 2 patterns. This one was pretty awesome so I suspect the last two will be spectacular. I would do this one again - with a few changes perhaps. I would stick with a shorter heel, a more basic heel turn across the bottom & a rounder toe. And only RIGHT TWIST braids down the sides!
Posted by laurie in maine at 1:17 PM

I'd say the effort was a valiant one! No shame in this defeat. I'd probably still be trying to cast on, for heaven's sake!

Wow, you're FAST! Congrats on making it so far, best of luck next year ;)