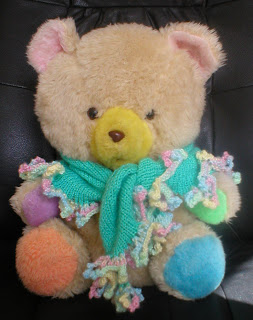 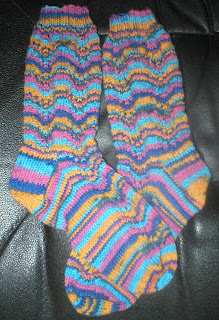 Look what the Easter bunny coughed up?

There is just way too much pastel in the this (almost) Lala Scarf for its own good. I didn't follow directions. That may go without saying for most things I do. The original pattern is found in Greetings from Knit Cafe and it's very lacy. Lots of YO's and wrap yarn around 3 times.
Too lacy perhaps.

I first saw an almost Lala scarf at Rainy Day Goods, rolled into a pretty pink bouquet. Not sure why I felt compelled to knit it during the off time, before round 3 of Sock Madness begins. I finished the Ripple socks that went on hold when round 2 started and I didn't feel like starting another pair of socks just yet.

So I decided to knit a scarf. Without following directions.
Yarn used is Cherish Minty Moda-Dea along with Cherish Baby Print variegated for the picots. It seemed like it would work. In a not so pink kind of way. I used size 7 needles and just knit until it measured 14 inches in the middle. Directions call for 14 x 33 inch scarf - 95 stitches.

I didn't actually read the part where it suggested there would be 95 stitches until I was at 14".
I had 175. And there was still 4 more rows in which we would double the number of stitches twice. Picot trim if knit as instructed would bring scarf to 380 stitches. I was up to about 700 stitches when I started the picots from hell.

And it's not that I don't swear (way too much)...for some weird reason it feels wrong to type swear?

Stephani has allowed she would wear it if she were feeling particularly girlie. I suggested she wear it and the first person who shows any sign they aren't repulsed by it - they get to have it.
Except it's more likely a guy takes notice and in all likely hood owning a pastel ruffled scarf is not what they're interested in.
Posted by laurie in maine at 4:21 PM

"Seemed like a good idea..." is The Sheep Theme Song. I have many, many ideas and all of them seem really good. Most of them never make it to the finish line and for good reason.

It is a pretty scarf but probably not for everyone. You'd have to be really secure in your "girly-ness" and all. The bear wears it rather well!

apparently the bear wears it better than ME, because you didn't use MY modeling photos.. hmmph.

I decided to protect you (my child) from the hordes of readers that visit/stumble across this site. Both of them!

I think you have to be on crack to do that damned picot edging.

I'll stick to emergency blinds fixes with duck tape, a glue gun and some thumb tacks with a coffee mug for a hammer - don't ask, it was a long weekend!