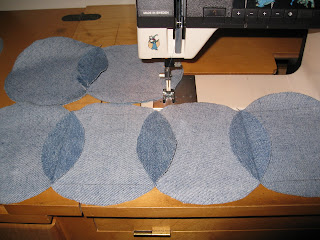 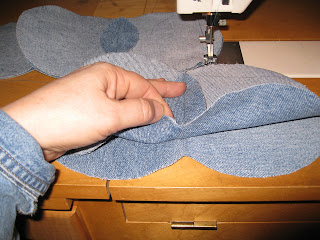 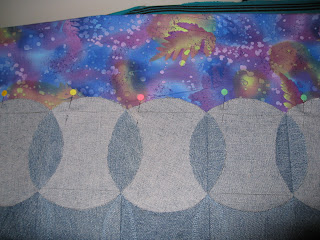 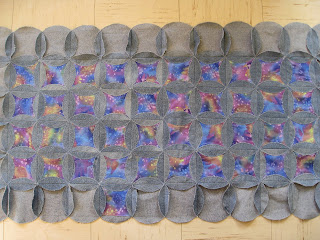 Internet Exploring a couple of mornings ago for inspiration, I stumbled (back) upon this site for Mock Cathedral Windows - a technique for recycling worn out jeans into a useful thing.
I've made pretty good progress after a few hours of sewing.
Half of a quilt!

I had to figure out a couple of the short cuts on my own as the written directions are not as easy to follow as pictures would have been.
So I'm including a few progress shots. (They are out of order of course because I never upload pictures in the right order first time out. I may or may not rearrange them later!)


Some things I figured out:
After trying a satin stitch zig zag, I didn't like the effect. So I used a fancy stitch on my machine with a first back, then forward criss crossing motion. It's a little too jerky now that the quilt is getting big! Will experiment some more next time before committing myself.

I intend to experiment with a miniture version to see if I can make a Fabric Postcard Quilt for the next round of Postmark'd Art swaps. I've signed up for "Recycled" already so hope it works. Maybe I should have tried it first or I'll be left thinking up a new idea. I'm thinking of trying a dream catcher in one of the "windows" of a postcard, so stay tuned!

Your quilt is looking great! The fabric you are using for windows fill goes so well with the denim.

May I add your comments to the notes on my site and photos when you get done and link to your blog?

I'm curious, did you find the quilt because you were looking at our Crystal Palace sock yarns?