Can I look now? 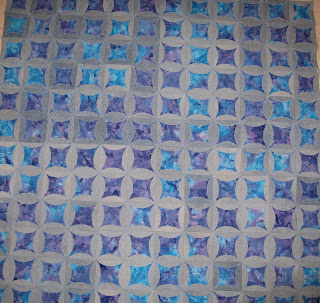 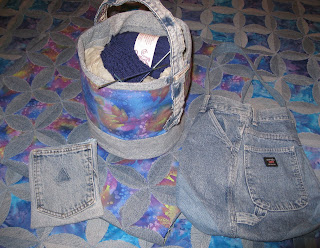 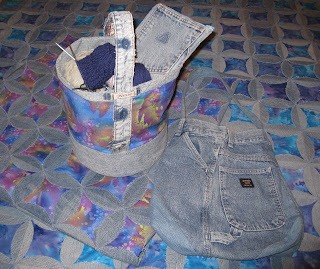 Me and my sewing machine.

We've been hiding out in the other room with the TV off.

Listening to Pandora on the laptop.

(So what if I've had it since December and just caught on that the thing is actually meant to be portable. Like a really expensive radio.)

I've been sewing up a storm.

NOT listening to cable news talk.
Too much can drive a person crazy.
I'm tired of screaming pundits, push polls and back stabbing talking points delivered by straight faced political hit people.

And I'm tired of being angry.

Not sure if lifting eyes heavenward to request a presidential candidate get the most votes is proper use of a spiritual aid?

But, THANK YOU MAINE for voting for Obama most!
You had me worried, I'll admit because I really had no clue which way we would go. Sunday's caucus turnout did us proud.

So while tucked away hiding out in my sound proof Laundry slash Sewing room:
I've finished my 2nd Denim Circle Jeans Quilt!

And a tote bag to match the 1st Circle quilt. Actually called the Collapsible Bucket, found here at a recently discovered website called Instructables. "The World's Biggest Show & Tell". Very cool. Detailed how-to directions for making stuff. I've been on the look out for more things to make from denim. I'm blaming it on Project Runway's 501 Jeans & a T-Shirt episode ;) So that makes it all Stephani's fault since she got me hooked on the show.

I changed my bucket...a bits.
Bigger. Recycled materials including waistband handle. It needs another button though, because the belt loop at the top guiding the strap is not stable enough with just the one button I reused at the bottom.

Also tried this Protect the Tech project, since I've been saving the pockets from all the jeans I've hacked up.

Plus a Denim Quilt Leftovers Tote (I made it up :) I'll probably fill it as a diaper bag for a baby shower gift at the end of the month.

Busy, huh? I missed a whole new technique for destroying a News Reporter's career while sewing. Shustered: “to lose a career for an inappropriate, relatively minor utterance about a powerful person or group.” Okay. Back to the sound proof room.

I'm about out of worn out blue jeans. Perhaps I'll put out the word to family I'm looking for donations. Noble cause. I'm willing to help with your spring cleaning!

Want a picnic quilt?
It's a long time until November's election.

And after 40 years of using a sewing machine and NEVER sewing a finger I've managed to stab a machine needle through a finger tip. TWICE this week.
Posted by laurie in maine at 2:04 AM

Wow, that sewing bag looks awesome!
You're more than welcome to post your denim projects on Instructables too, you know. ;)

Christy Canida
(for the Instructables team)