It's not your fault, Dorothy 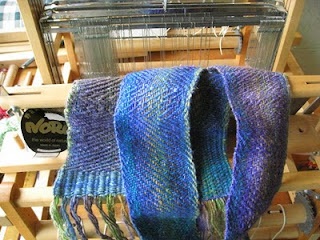 What NOT to do (perhaps) with 2 pricey skeins of Noro Silk Garden yarn.

This was the first Noro I've ever purchased.
And last most likely. While it was VERY pretty on the outside of the skein, inside dwelt some of the yuckiest purple + yellow + green equals mud I've never imagined.
I know this about variegated yarn and still I fall for the pretty bits on the outside. I much prefer a one or two color-shade variation. Why do I keep forgetting that?
All those colors don't belong together! 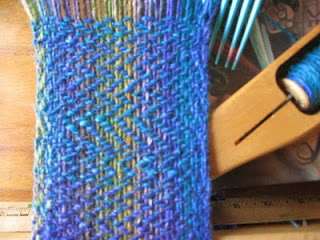 I didn't read yarn reviews until after I bought it of course. The knots where they joined blue and green with no attempt to match the color pattern would not have come as so much of a surprise if I had. Likewise, the mysterious foreign objects spun into the yarn that have now been identified as sticks, hay and other little "bits" sheep get stuck to themselves. No mystery.

I threaded the reed at every other space with the 1st skein of Noro, thinking that by spreading it out farther across the loom it would make the scarf wider. The 2nd skein would be the weft. The tiny little skeins didn't have as much yardage as I imagined they might.

Wish I could say lack of yardage was this Scarf's only issue!

I began with the plan to do an all Rib Weave (page 20 - Learning to Weave by Deborah Chandler). Didn't look good and I suspected this was due to the every-other-space threading.

But did I weave backwards (unweave?) and start over?
Thread the reed differently?
NO.
Should I have?
YES! Definitely.

I ended up breaking a warp within 6 inches and it was pretty clear things were not going to get any better. The force of the beater smacking up against the yarn - especially the outer edges - was certainly going to break a few more very quickly. Did I stop NOW and regroup with a new plan?

NO. Well not exactly 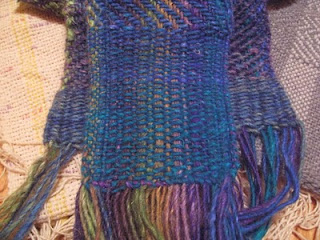 .
I "beat" nearly the entire thing into place with a comb.
(Do NOT recommend!) The beginning of the weaving where I used the normal beating action was several inches wider than the rest of the scarf.

I ended with a Rib Weave pattern to see what it might have looked like, if threaded correctly.

Thinking I can cut off the wide end and make hems so it looks even. Steph says they are "her colors" and she likes it. I've given her permission NOT to say "My Mom Made It" if anyone asks.

It looks pretty from the picture, but I can imagine your frustration with all the issues. It is nice to "learn" lessons about the yarns.