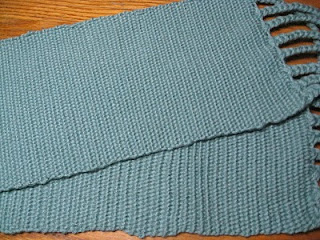 I cut off the heddle strings and prepared to scrap my 1st Backstrap Weaving project. But I'd carefully saved the cross as I considered whether or not it was worth a try changing out the heddle strings to match same fiber as the warp and see what happened.
I FINISHED IT! 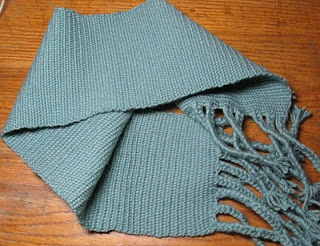 Weaving did get easier, although after a few inches started matting up again. The first & last warp (the ones that had a slip knot to start with) were not the right tension - too loose - and contributed a little to the funky edges. Along with all the other things that this beginner did wrong, I'm sure.
(Like winding on 2 yards of 96 wraps and skipping the BEGINNER PROJECT with only a yard length of 20 something ends.) But I'm pleased to have completed it rather than quit. I am NOT a quitter!
An extra cross in back has been suggested by the experts at Weavolution as a way to control the tilty sliding around issues, of both shed rod & the ends themselves. I thought I might have missed a step, but I've now learned how to add an extra cross after the loom is set up. I drilled extra holes in the ginormous wooden knitting needle I was using as a shed rod and it seemed to help keep that from sliding all over the place.

(That funky, weird single "needle" was in some stuff I inherited from aunt Nonnie's craft stash, so I was happy to find a possible use for it. Although now that I've drilled holes in it - it probably won't function well for whatever it was originally intended!)

NEXT TIME I will add the extra cross in the back to see if it helps with stability. 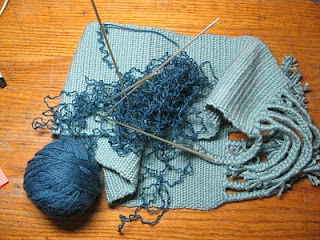 Just to keep me humble in the new year, I managed to knit the crap out of a Mystery Sock Knit-A-Long. Wrote down the 1st clue and then after the 3rd row, proceeded to knit what the hell ever I felt like, it seems.

"It only hurts for a minute" to yank out the needles and start over? 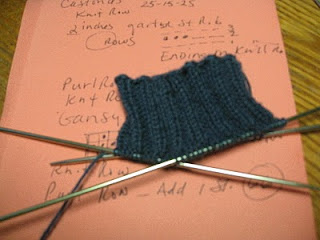 was ripped out. I've now reknit it (following the ACTUAL directions) as well as getting the 2nd sock almost to this point. Directions include a bead option but I don't seem to have anything that works in my stash. This is Opal yarn, about the thickness of a strand of hair. It's been hanging around for a year or so in the yarn bucket. I swore I was never making socks out of yarn this thin again.

Now I remember why.
Posted by Laurie in Maine at 5:06 AM

That's a lovely shade of blue and you did a wonderful job of it!
Micki

Happy New Year, Laurie! I just love the way you tackle new projects with totally different crafts. You are a real inspiration even if you don't like thumbs!