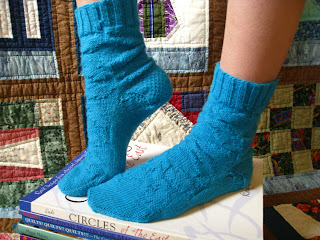 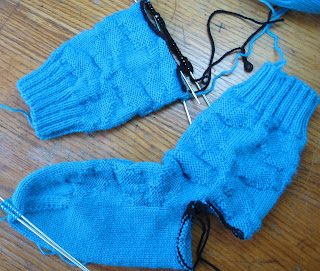 Yes. I took time out starting Thursday morning for some Mad Knitting.
If it's basketball playoff time, it must also be time for Sock Madness 3.

Since I participated in 1 & 2 it was hard letting go. The words "I don't think I'll play this year" were spoken aloud, with at least 1 witness. But in the end I decided to try the 1st pair, with a promise not to overdo it. I don't want to be a Pattern Collector - someone who ONLY signs up for the free patterns. That's not fair to all the sock designers or the 2 hosts.

I made it through round 1...
Finished Sunday morning. It had an interesting new cast on that I might try again. ("Twisted German" :) Luckily there was a YouTube video to get us through that.

The After Thought Heels were a little too much like someone thought up a way to put THUMBS on a pair of socks. They had us put a big hole in the bottom of the socks (on purpose!) for trying on purposes during knitting.
And then knit the heels last, with the idea you could replace the heel when they get a hole in them.

LOOK UP AT MY BLOG TITLE.
We don't like thumbs much around here!!

And it's SOCK MADNESS.
There's no 'trying on' in Sock Madness!
Posted by Laurie in Maine at 7:24 AM

What fun you have had Laurie. I have only made two pairs of socks - well 6 socks actually but two socks matched nothing - and it took me forever. I can't imagine how you could turn out two such lovely pairs in this short time. And with removable heels - I sometimes think mending is slower than making the original.

Nice work! The thing that bugs me about socks is that you have to make two just alike.....

The socks are beautiful! What is a good method for a beginner that you would suggest?
Thanks!
Micki

Thanks Laurie for the Sock Madness encouragement on my blog. I finished my socks, Yay! I hated the Afterthought hell (I mean heel) but felt accomplished when I finished them. Onward and upward!!

I forgot to add that your socks are beautiful.