Time for a new obsession? 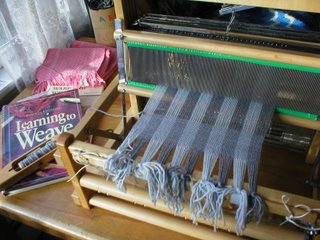 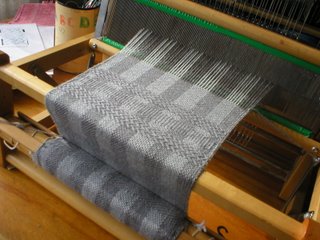 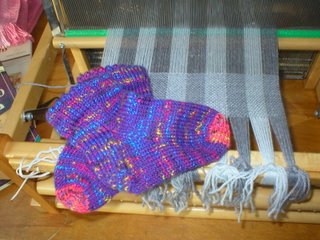 This weaving thing turns out to be quite addictive. Certain family members have already wondered aloud if they've seen the last of the Mom Socks. I should think not! A loom is not exactly a project for on the go.

Monday I prepared the warp threads, setting the loom up: step-by-step. I would like to say I followed all of the steps from the Learning to Weave book exactly. Seriously. That would be expecting a little too much! Mistakes were made that hopefully won't be made the next time.

Yes. There will be a next time. Less than 16 years from now, even! It was NOT picture perfect like in the book. But how relaxing is this?

Tuesday was for actual weaving. This first project may actually get some use as a scarf...Steph wanted to know if it would be done by today. It almost was except I took time out to make an apple pie and then had to register the Jeep and go to town to pay the insurance.

I finished 5 pair of socks for Socktoberfest:
3 pair in a basic pattern, 1 with the Dublin Bay lace sides and one using the Picot tutorial. Ran out of purple Jelly Beenz so the toes are watermelon. Tried the Socktoberfest tutorial for weaving in ends while joining.
Posted by laurie in maine at 5:48 PM

Five pairs of socks???? Good heavens...I barely got one off the needles. Most impressive.

I do love the weaving. I would love to have more than my teeny tiny rigid heddle loom, but I just don't have the space. Plus I have all those socks to finish!

Your weft pattern is fantastic! Do you think you can get a more detailed photo of it up later? (I'm just being nosy...)