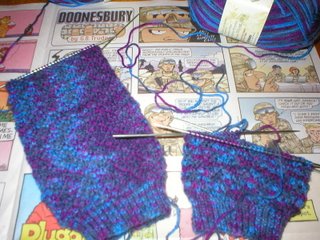 It doesn't appear as if they'll match at all. The second one is taking on a variegated/stripe look.

I think it's called pooling when the colors swish around the sock in waves? I actually like that and was hoping for the second one to do it as well.

I grabbed up the unread weekend funnies to use as background to cut down on glare from the kitchen table. The Doonesbury cartoon tells of a new feature on their website - space offered to the Troops to voice what they think. Click on the Sandbox. Checked it out to see if it was real.
Posted by laurie in maine at 9:26 AM