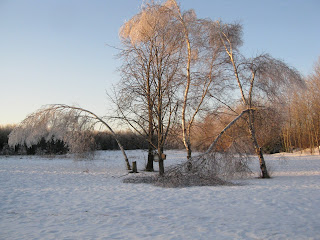 An ice storm took out a couple more trees on our front lawn. 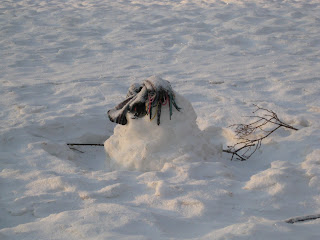 My snowman lasted until March 4th - the head fell off first. For a while the scarf looked like it was hanging in mid air around the invisible man! Then we had 3 inches of rain in 24 hour period; went into basement flood watch mode but luckily no broken sump pumps or power loss this time around.

Sock Madness 5 has begun!
Having participated in Sock Madness for many years, their labels outnumber many of the others on my sidebar. I dropped out of SM4 on the very first sock and wasn't sure this year would fare much better once I saw the first pattern. K2, P2 stripes.
Nearly the entire pattern: knit two, purl two. UGH! 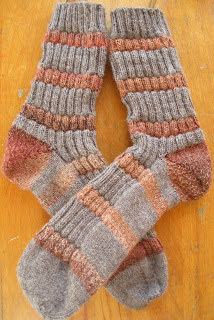 I hate stripes and I'm the slowest K2, P2er in the east :)
Like March Madness Basketball, there are refs that make calls on the rules. Shortly after pattern release it was allowed you could do the socks in a single color since the pattern designer showed one at the end her pattern. I had already completed 3 stripes. I took her throw away picture of a solid color sock at the end as a sample of what it looked like AFTER Sock Madness. Not an actual option if everyone was to knit with the same handicap (2 yarns dangling & tangling the entire sock.) But once stripes were started it was ruled you had to do stripes all the way to the toe.

Not sure what Mad at the Ref chant applies, but I shouted a couple in my mind for a while. Then I decided to suck it up and keep knitting. I started them Friday at noon and finished them Tuesday morning. On to round 2?

At least they're "stephani colors".  March Madness also means my daughters both have a birthday coming up this month.

Which reminds me...yikes!
Posted by Laurie in Maine at 6:05 AM

That snowman looks like it had a very hard day! Love the quilt and the socks....no ice here, but lots of wind today.