Forward on the learning curve 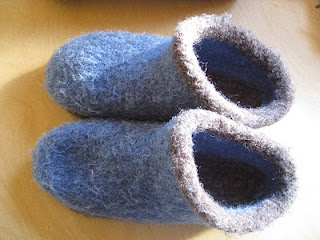 The knitting/crocheting/weaving world is celebrating the 2010 Winter Olympics in it's own way. By crafting up a storm! I've completed my 1st two projects:

And cut another woven fabric fresh from the loom.
I made a really fraking big tote bag!
(The Olympic Carrier :)

Came off the loom Saturday morning. 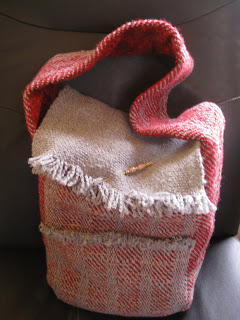 I ran out of Weft color 3 times before I got to the end of the Warp. The color breaks helped decide the design.

As I added the finishing touches to the bag I realized it was pretty “fraking” big. So in honor of the Ravelympics & Battlestar Galactica I’ve named it The Olympic Carrier :)

Cutting this time wasn’t so scary - in fact I wove it with the express intention of cutting immediately. Ran out of yarn I was using for the weft and there wasn’t a skein to be found at any of the stores around here. I wasn’t thrilled with the red/grey color at first, so I just wanted to get it off the loom. Grabbed the Debbie Mumm brand; a little thicker weight, deeper red and it has sparkle shots throughout. Was not crazy about that either. By using it on the sides & handles of the bag as contrast, it didn’t seem so bad when I was done.

After thought bag flap done in Warp color just so I could finish the skein and the warp that was at the end of the loom. (Just found another skein of this stuff I've been using as warp. I thought it was gone. Jeesh!)

Already planning the next project to cut up. Maybe down size the Design-As-I-Go method for a smaller scale bag pattern next time.

Very nice! I have that clog pattern; looks like I gotta try it. Those are very cool. Did you use a purchased sole?

Oh GREAT bag! Looks beautiful and I bet it will be quite handy in the large size.
Love the clogs. I've made felted slippers for everyone but never the clogs. I'm going to have to take a peek at that pattern next time I go to town.