I can't explain this. 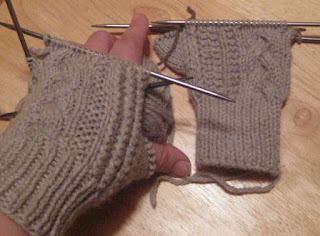 It goes against everything I've believed until now. I am knitting MITTENS.

I got out my Barbara Walker Treasury Books 1 & 2, inspired by this picture of mittens, chose 3 stitch patterns from Book 2 and for some reason felt compelled beyond all understanding to rip out 18 rows of ankle knitting and make mittens instead. There's thumbs in mittens
(we don't likes thumbs!) 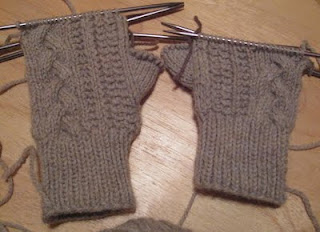 They started out as socks.
Really they did! A one Goodwill skein of yarn I hoped to use up from stash to make a pair of socks. 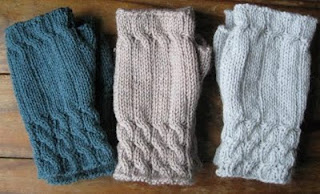 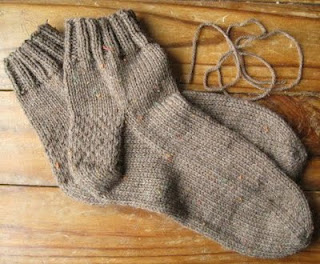 I cast on Saturday morning for some grocery store knitting-while-waiting (for mom) and by Sunday morning I was ready to do the heel flap. I hoped to repeat a recent triumph in optimal skein usage and knit up as much as possible from the single skein of yarn. There was no label, not that those are much help to me. I grabbed up some size 5 needles and cast on a random number and hoped for the best. They would be whatever size they wanted.

I knit until the voices in my head said to change direction.

Knit both at the same time and tried to guess how long the yarn would last. That little scrid of yarn next to the brown flecked socks is all that is left from that skein of yarn!

BEGIN RANT: Dear SOCK YARN people: put enough in a damn skein of yarn to knit a damn pair of average (small even) socks. Most of us have 2 feet and this gimmick of "you need 2 skeins to make a pair of socks" is unacceptable. END RANT.

I've been knitting under the radar since the middle of October. My sister-in-law's grandmother mentioned her church was hanging items on a tree instead of ornaments and I thought I would Knit Unto Others a bit. Use up some stash yarn.

In between socks I started doing some more Fetching fingerless gloves. This probably explains how the thumb thing happened. It occurred to me that knitting the WHOLE THUMB might actually be easier than binding off a hobo half-thumb.

PLEASE NOTE: I seem to have conquered (for now) my lack of LEFT/RIGHT sense. There's going to be one of each!! These do not fit me however. The do fit one of my offspring, who points out she has a brown coat. I may have to buy a special skein for myself to justify the next attempt.

We'll see if this thumb business sticks.
Posted by Laurie in Maine at 7:17 AM

They all look lovely, warm and delightful.....thumbs or no thumbs!

I love fingerless gloves and have made Fetching several times, holding my breath that I'd have enough of the recommended yarn. ( I did with about 12" to spare.) I so agree about needing 2 skeins of yarn for socks, especially when 2 skein costs a lot. (I always think, would I buy a pair of socks for that much?) Your FG turned out very nicely, BTW!

You knit so well, and I love your gloves!
Micki