Socks given away freely 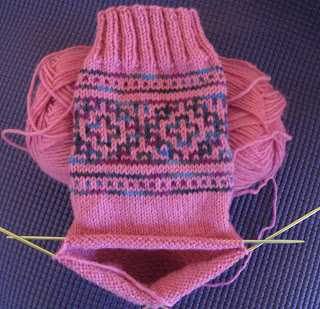 Deciding what to knit before the next round of Sock Madness took a couple of false starts. I finally settled on a remake of the Pretty in Pink pattern I made up as I went along at the end of 2006. They were given away to Sara's boyfriend's mom for Christmas. I'm making another pair!

Cuffs were knit and ripped out for several different patterns before deciding on this one. I tried a Mystery sock with clues being given out one at a time on Ravelry. None of my yarn choices made me happy and it's a cuff being knit inside side out.

At least 5 attempts were ripped out like they never happened before I gave up.
Lots of backwards knitting. PURLS. All over the place.
I need a break from that after Reversai!

I also tried a couple of Spring lace sock patterns but the YO's kept disappearing in the next row. I kept coming up missing stitches every other needle. This does not bode well if the next Sock Madness pattern is lace.
Posted by laurie in maine at 6:55 AM