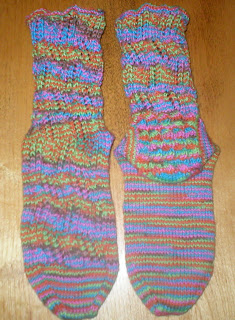 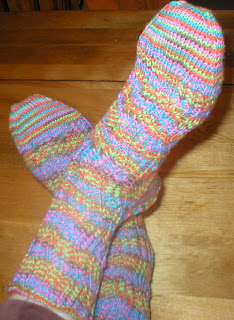 This pair took me several hours past my Sock-a-Day goal.

I forget which, and I'm too lazy to go look!

I only did 16 rows Friday night, before fading daylight and several pattern errors forced me to put it down and walk away. I kept thinking "trust the pattern" and that it must be something I was doing wrong, but turns out 4 or 5 rows had tiny errors that made a huge problem if you were not skilled enough to recognize the pattern.
(Or didn't bother to check the accompanying chart that only had 1 tiny error!)
Discussion group at Flickr had them all straightened out by the next day. Should have checked in sooner but I'd already had a long day and was exhausted.

Decided to snap out of it and just knit these in spare time.

Finished them at 7:33 p.m. Sunday. Just minutes after the Final Four posted the last entry that would move on to the next round. There was no sitting up all night knitting on pair at all. Plus I took Mom on all her errands on Saturday - at least 3 hours of nonknitting time doing the normal grocery shopping & prescription filling routine. Since I was out of the actual competition didn't seem right blowing off commitments. (Dad was very thankful, as he got to go golfing.)

I even did dishes for god sake! If I had known I was going to come so close to finishing before the final 4 was set, I would have at least skipped housework. For the good of the cause! ~ :)
Posted by laurie in maine at 6:06 AM

Laurie, if you can get that close without really trying, then you'd better be up front when we try to beat the time of at least one of the two final pairs, no? C'mon, I'll try if you will.

And Mt. Kathadin followed by Halcyon sounds pretty good to me. Was it you alerted me to a barn somewhere near Halcyon that has piles of remaindered coned yarn? Might be over that way in October. Whereabouts are you?